With the experience and dedication of its diverse, international membership and a 40-year plus track record, the Geothermal Resources Council (GRC) has built a solid reputation as the world’s premier geothermal association.

The GRC is a tax-exempt, non-profit, educational association 501(c)(3). Formed in 1970, the GRC was incorporated in the state of Washington in 1972 and in California in 1981. With more than 1,300 members in over 40 countries, the GRC actively seeks to expand its role as a primary professional educational association for the international geothermal community. The GRC serves as a focal point for continuing professional development for its members through its outreach, information transfer and education services. 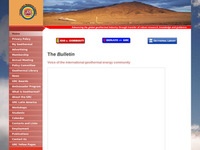