The International Association of Mathematical Physics (IAMP) was founded in 1976 in order to promote research in mathematical physics. The Association invites mathematicians and physicists (including students) interested in this goal to become members.

Membership supports the activities of the Association. One special advantage of membership is substantial discounts on personal subscriptions to several journals and on certain books offered by major publishers.

Applications for ordinary membership may be made on the web. Dues are quite modest and it only takes a few clicks to pay them, in the first year of membership dues are not charged. People from economically weak countries may apply for reduced dues status. 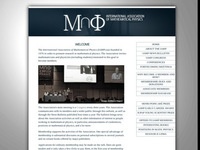