The Valve Manufacturers Association of America is a trade association that represents the interests of nearly 100 North American manufacturers of valves, actuators and controls. Collectively, members account for approximately 80% of the total industrial valve shipments out of U.S. and Canadian facilities. 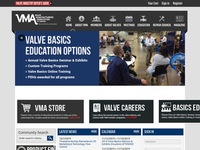